Nils Willison (1880-1964) was a Lutheran pastor, professor and administrator. Willison graduated from the University of Toronto in 1908, received a BA from Queens University, and was the first graduate of Evangelical Lutheran Seminary (now Waterloo Lutheran Seminary) in 1914. He was a professor at Waterloo College from 1918-1928, and also served as Registrar. From 1928-1936 Nils Willison was pastor of Trinity Lutheran Church, Hamilton. He was President and Dean of the Lutheran College and Seminary in Saskatoon, Saskatchewan, from 1936-1949. Willison returned to Ontario in 1949 and served as pastor of the Owen Sound-Wiarton parish until 1952. He was a member of the Board of Governors of Waterloo College and Seminary for 12 years. The University of Western Ontario granted Nils Willison an honorary Doctor of Divinity degree in 1944. Wilfrid Laurier University’s Willison Hall is named in his honour. 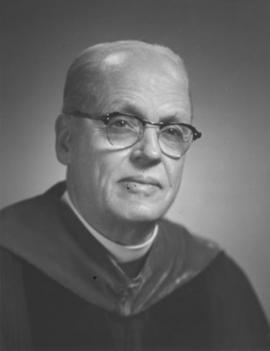