The fonds consists of copy prints of photographs taken by Chooutla (Carcross) Residential School teacher A. Richard King of his students and their school life in and around Carcross, Yukon. Subjects include Mr. King, Principal Lawson, Vice-Principal Walters, supervisors Miss Fennell, Miss Barstow and Beverly Bear, the school, tobogganing, and games and activities during Winter Carnival Days and Sports Day. Also included are images of the Matthew Watson General Store and tourists waiting to board the White Pass and Yukon Route (WP&YR) train at the Carcross station. Many of the students in the photographs are identified including Helen Malcolm, Dorothy Johnnie, Judy Hager, Vivian Smith, Velma Silas, Ben Johnson, Nancy Tizya, Virginia Simon and Ann Smith.

The fonds consists of copies of four hand-written (and transcribed) letters Aaron Moulton wrote to his wife and children during the year he spent in the Yukon's Klondike from 1897-1898. Also included is a list of people mentioned in Aaron Moulton's letters.

Fonds consists of drawings, watercolours and designs of A. H. Howard produced in Toronto between 1880 and 1914, especially in the sketchbooks in which Howard drew Ontario landscapes and towns, flowers, trees, human figures, factory interiors and other subjects. Similar drawings and watercolours are contained in two albums and a portfolio. Also included are examples of his decorative and calligraphic work from illuminated presentation addresses, certificates, bookplates and other materials.
Contains series: 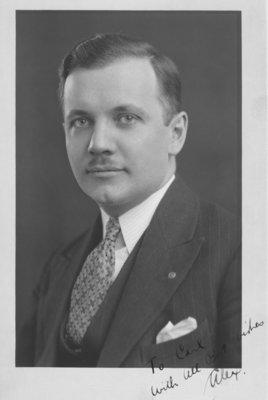 Fonds consists of a notebook commenced by Anna Belle Wing Kindlund in 1895, in which she recorded information on works of art and architectural monuments (chiefly European), with thumbnail-sized albumen prints of many of the items and occasional ink sketches. The notebook has alphabetical index tabs, and its entries are alphabetical according to city. The inscription on the frontispiece reads “Anna Belle Wing – B.S. ‘95”. The fonds is arranged in a single series.

Fonds consists of Art Institute of Ontario records accumulated by Paul Bennett, in the course of his duties as Field Director / Adviser and later Director of the Art Institute of Ontario. Fonds includes Adviser’s service reports, minutes of annual meetings, director’s reports, funding briefs, and two scrapbooks documenting the activities of the AIO. Fonds is comprised of the following series: 1. Adviser’s service reports 2. Minutes, director’s reports and funding briefs 3. Scrapbooks

The fonds consists of exhibition lists; manuscripts of articles, lectures, radio broadcasts, and a book; correspondence; art education pamphlets; materials related to a National Film Board production about the artist; papers about other artists; memorabilia from the Arts and Letters Club, Toronto; photographs and papers relating to Tom Thomson; and a source book on Arthur Lismer prepared by Marjorie Lismer Bridges.

The fonds consists of minute books, treasurers reports, membership lists, lists of speakers and programmes, listings of books circulated, scrapbooks and photographs. There is one wooden plaque, presented to “Arts & Letters Club” on the occasion of the Incorporation of the City of Burlington, January 1, 1974.