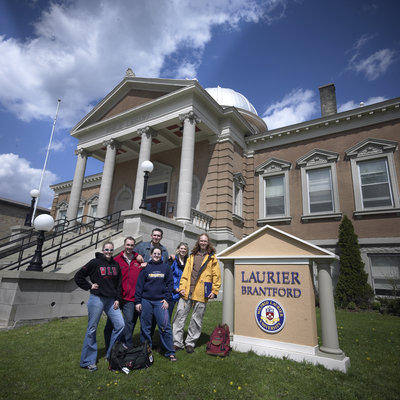 Planning for the creation of a university in Brantford began in 1996, when the Brant Community Futures Development Corporation commissioned a business plan for the establishment of a university in Brantford. The city of Brantford had experienced economic decline in the wake of the collapse of the farm equipment industry. Community leaders, including members of the Grand Valley Educational Society, hoped that a university would contribute to urban renewal of the city’s downtown core. They also sought to provide local post-secondary educational opportunities for local students. In 1998, the City of Brantford, The Grand Valley Educational Society and Wilfrid Laurier University signed a “letter of intent” to form a campus of Laurier in Brantford.

The first building occupied by Laurier Brantford was the Carnegie Building on George Street, originally constructed as a library, and renovated as a university building. As it expanded the university has constructed new buildings, including the Student Centre built by the Student Union in 2005. Other university buildings, like Grand River Hall which opened in 2001, are examples of adaptive re-use, and have been renovated to meet the needs of the university.

Laurier Brantford is administered by a Vice-President/Principal who reports to the President of Wilfrid Laurier University. The faculty report to the Dean of Brantford, and govern through the Brantford Divisional Council. Library service is provided by Laurier librarians at the Brantford Public Library.